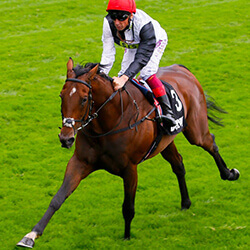 Many were taken by surprise after learning that Cracksman would be attending the King George VI and Queen Elizabeth Stakes, which are set to take place at Ascot. John Gosden, trainer of Cracksman, told reporters that they will only take place in the event if there is sufficient rainfall before it starts.

Cracksman has not been held in high regard lately, especially after his defeat in the Prince Wales Stakes that took place at Royal Ascot. His participation at the moment is very much tied to how the weather pans out, with Gosden adding that he will only be running if there are thunderstorms preceding the King George.

Gosden-trainer Coronet may also run in the Stakes, as the horse did well in the Group One of the Grand Prix de Saint-Cloud. Gosden does feel, however, the horse needs to raise her game.

Kew Gardens, on the other hand will not be taking place in the King George after a pre-race test, which indicated that the horse was not firing on all cylinders. Trainer Aidan O’Brien has told reporters that he doesn’t feel that his team is working at 100%, and that they are not ready for the prestigious event. O’Brien is relying on Hydrangea to at the moment, who will be ridden by Ryan Moore; as well as Rostropovich.

Sir Michael Stout has two horses in the running in the form of Crystal Ocean and Poet’s Word, both have both done extremely well this season.