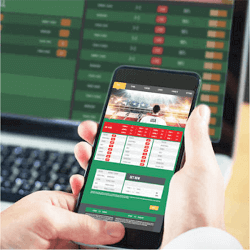 The Shift Towards Online Betting

On Tuesday, local punters, horseracing enthusiasts and anyone with cash to spare contributed towards one of the biggest betting days of the year Down Under. As predicted, the Melbourne Cup brought in over $140 million in bets, making it one of the biggest betting sporting events in Australia. This year, online betting agencies and local bookmakers cleaned up, while land based bookies showed a downward trend.

Research done by IBIS World showed that Tabcorp is predicted to have claimed just under 50 per cent of the total betting market at the Melbourne Cup. This equates to around $70 million for the day. Tabcorp owns the TAB Victoria as well as Australian Capital Territory and New South Wales. To add to this, the market leader also own Luxbet.

The Tatts Group took the second highest chunk of the betting with around 18.6 per cent of the market. In monetary terms, this equates to about $26 million in Melbourne Cup bets along. Tatts is currently in the middle of a major takeover by Tabcorp owns the TAB in South Australia, Queensland, Tasmania and the Northern territories.

Paddy Power also showed significant revenue on the day, pulling in $16 million in Melbourne Cup Bets. Paddy Power owns the local Sportsbet brand and is expected to show significant increases in the coming months. The Western Australian TAB took a decent haul, generating $8 million in bets for the day. The IBIS research showed that the remaining 14 per cent of the industry was divided between William Hill at around 3.7 per cent and Racing Victoria at around 4 per cent.

Speaking to the press, IBIS reported that broader Australian betting market showed significantly improved performance due to a growth in sports betting with a definite shift towards online betting services. The industry as a whole is expected to grow by 1.2 per cent over the next five years. By 2021, the sports betting market is estimated to reach a massive $3.7 billion. IBIS pointed out that although sports betting is currently a small market, it is the industry’s fastest growing segment overall.

Despite the massive revenues brought in by the Melbourne Cup, IBIS predicts difficult times for parts of the betting industry. With a huge shift towards online betting, many standalone TAB outlets are struggling to stay afloat. In Western Australia, a total of 11 sole TAB outlets were listed for sale with some of the outlets having been on the market for more than five years.