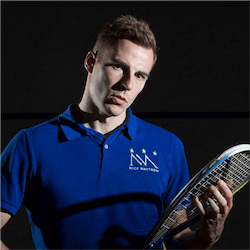 Squash star Nick Matthew starts the 2017 World Squash Championship knowing it will be his last. The British 37-year-old is the No. 5 seed in the hunt for the men’s singles title in Manchester, behind Ali Farag, Mohamed Elshorbagy and Karim Abdel Gawad; three of the six Egyptians in the top 10 seeds.

The tournament No. 1 seed is France’s Gregory Gaultier, which is sure to add a frisson of Brexity rivalry, should he have to play the Englishman at any stage.

Matthew has announced that he will be retiring from professional competition after the Commonwealth Games, at which he aims to take a third men’s singles gold, and the British Open, both of which come up in the spring of 2018.

While punters are following his progress at his final world championship, it’s an appropriate time to look back on the highlights of his career.

Matthew, a South Yorkshire lad born in Sheffield, England, in 1980, first achieved prominence on the world squash stage in 1998, when he made the semi-finals of the World Junior Championships, and was part of the England team that won the World Junior Team Championship.

In 1999, he won the British Junior Open under-19 championship. It was his 2006 triumph in the British Open that turned him into a household name among squash fans overnight, however.

A year later, Matthew won the US Open, kicking off a decade filled with notable achievements. He was ranked world No. 1 by July 2010, and the titles he has won include the British National Championship, the World Team Squash Championships, three World Opens and the Qatar Open.

He has two men’s singles gold medals and a men’s doubles gold from two Commonwealth Games, as well as a men’s doubles silver from Glasgow in 2014. They rack up alongside his gold and silver from two World Games, and three golds, a silver and a bronze from five World Team Championships.

He was awarded an OBE by the UK in the Queen’s Birthday Honours List in 2015.