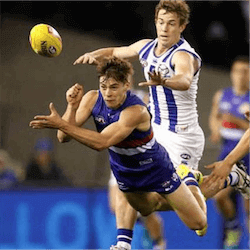 Australian sports betting enthusiasts have plenty of tennis and horse racing options over the next two months, both locally and internationally, but the home-grown footie season is also just around the corner. The AFL 2017 Toyota Premiership kicks off on Thursday, March 23: the start of 27 weeks of thrilling Aussie Rules action culminating in the Grand Final in September.

Many punters are hoping for the Western Bulldogs to retain their crown: their 2016 Premiership win was their first in 62 years, so fans are keen to avoid a return to the drought. But it’s way too early to work out where the smart money will be in the Grand Final just yet. Here’s a look at the opening game.

Melbourne-based teams Carlton and Richmond will contest the opening match at the MCG. Along with Melbourne’s Essendon and Collingwood, these two make up the Big Four in AFL history, considered the sport’s fiercest rivals for more than a century. Both the Dark Blues and the Tigers attract a substantial fan base when they play at the MCG, so there is sure to be as much rivalry in the crowd as there is on the oval.

Both Fighting Back from a Slump

Going into the AFL 2017 Toyota Premiership, both the Richmond Tigers and the Carlton Blues have everything to play for. Each side has been around for more than 100 years, with a proud history and plenty of championships under their belts. But within the past two decades, both teams have hit slumps. The 2016 Premiership finished with the Tigers 13th on the ladder, and the Blues one place behind them: so both are fully motivated to come back strong this year.

If we had to pick a winner of the opening clash of the 2017 season at this point, however, we’d be going with Carlton. They hit the Number 14 spot last year on the way up out of a trough, under new coach Brendon Bolton, after hitting 18th on the ladder the year before. It was their lowest finish ever, after a series of bad years that began in 2002.

Richmond, on the other hand, hit 13th place last year on the way down: in the previous three years, the Tigers had finished consistently in the Top 8. Carlton has also won 22 Premierships as opposed to Richmond’s 10. The last time the Blues were champs was in 1995, but the Tigers haven’t won a Grand Final since 1980.