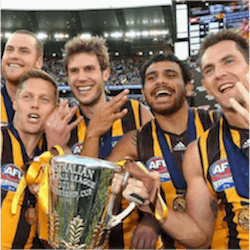 Footie fans the world over are eagerly awaiting the start of the AFL 2017 Toyota Premiership season on March 23, but Australian fans are waking up to the potential of the AFL Women’s season in increasing numbers, too. In the first round of its inaugural season this past weekend, AFLW gates and TV viewership surpassed even the most optimistic AFL expectations.

In fact, for the opening Carlton/Collingwood clash at IKON Park on Friday night, more than 24,500 fans squeezed into the 20,000-seater. Police eventually intervened for safety reasons, leaving 1,000 fans locked out. The other three games of the weekend attracted crowds of between 6,500 and 10,100, with TV viewership around 1.22 million on Friday night.

The immediate success of the AFLW season has led to calls for a Grand Final at the MCG on March 25. It remains to be seen if the AFL will concur, but what is certain is that betting fans will have plenty of action to keep them entertained until the Premiership begins.

Carlton defeated Collingwood by an impressive 35 points on Friday, with Adelaide scoring an even better 36-point win against Greater Western Sydney on Saturday. Western Bulldogs and Brisbane Lions join them, with four points each, at the top of the ladder, after they beat Fremantle and Melbourne, respectively.

Popular opinion has it that based on this weekend’s performances, the Bulldogs are the team to watch for the AFLW season. After a 62-year gap between AFL titles for the men’s side, it would be quite ironic if their female counterparts took the trophy first year out the gate; but there are still six more weeks of women’s footie before that can happen.

If the Bulldogs do win the women’s title, even more supporters are going to be rooting for the men’s team to defend their AFL Toyota Premiership title successfully. The Dogs are already drawing some heavy betting: at $5.50, they are second only to the Western Sydney Giants, at $4.50, as favourites.

Betting fans should also be watching the form of the Adelaide Crows, Sydney Swans, Geelong Cats and West Coast Eagles in the first few rounds of the AFL 2017 Toyota Premiership in March and April. They’re currently reckoned the four teams with the most chance of derailing the Dogs or the Giants before September’s Grand Final.