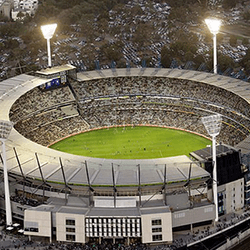 MCG has been listed as a COVID-19 exposure spot after a COVID-19 infected person attended a game at MCG last week. AFL chief executive Gillon McLachlan made the announcement ahead of this weekend’s fixtures.

The Geelong versus Carlton fixture on 10 July had a COVID-19 infected person in attendance. Players and spectators have been urged to keep an eye out for symptoms and get tested as soon as possible. The person had been seated in the level two MCC reserves, and people who had been sitting in the area are urged to keep a close eye on their health.

This aside, McLachlan has issued a response saying that the games will be continuing this weekend as scheduled. Anything that arises as a result of this will be dealt with, it is what the league has been doing since the pandemic began. Changes and challenges are inevitable. He is also adamant about having fans attend the games. Despite these challenges, he is excited that fans will be present for this weekend’s games.

He has added that the government are keeping an eye on it and that they are waiting for advice on how to proceed. Unfortunately, these things change so quickly that it is difficult to keep track of it all. The league will continue to navigate the pandemic and its challenges in the best way possible while ensuring that fans are able to enjoy the game.

Three of the five games set to take place in Melbourne in Round 18 will be taking place at MCG.

Nathan Buckley’s departure as Magpies’ coach after ten years has the world of football confused and shocked as little is known about his reason for leaving. Some speculate that he ….