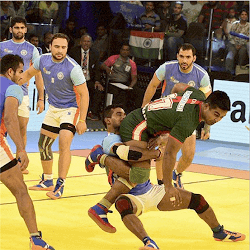 Adam Schneider is a name most sports fans associate with AFL football. For the past week, he has been in India representing his country at the Kabaddi World Cup.  Just two months ago, Schneider had never even heard of the sport. That was until former Gold Coast player Campbell Brown got hold of him to offer him a spot on the national team. Speaking to the press, Schneider explained that he had never been to India before and was looking forward to representing his country.

Kabaddi is a contact sport that is thought to have originated in Northern India and is extremely popular throughout the world. It may not seem like it but Kabaddi has a huge following in Australia with local tournaments attracting between seven and eight thousand spectators. When Australia entered into the Punjab-style World Cup, local Australian Punjabi channels screened every match.

The 2016 international rules Kabaddi World Cup hopes to increase awareness of the game and create support for the teams and the sport in general. Describing Kabaddi to the press, Schneider said that it is like playing British Bulldogs on a tennis court. Players have to be agile, fast on their toes and have exceptional tackling abilities. The international version of the came comprises of two teams. Each team has a total of 7 members that occupy halves of the field.

A New Challenge for AFL Athletes

A Kabaddi court or field spans over an area of 10 meters by 13 meters with boundary lines clearly marked on each half. The game is played in two 20-minute halves with a five-minute half-time break when teams swap sides. Each team then take turns sending a “Raider” over to the other half. The job of the raider is to tag an opponent and try make it back to their half without being caught. The team will win a point if the Raider makes it back without being tackled.

The tagged defender or defenders must try and prevent the raider from returning to his half by tackling him to the ground. If the raider is out of bounds or does not manage to make it back past the line, the point is lost.

Ahead of this year’s world cup, Schneider and Brown spent two weeks training with former AFL player Stephen Milne and five other footballers all leaning on the experience of the few professional Kabaddi players in the side. With the sport gaining momentum, it is just a matter of time before Kabaddi becomes a household name and Kabaddi betting makes its debut.