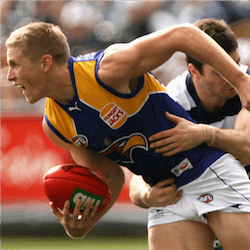 Round 13 of the 2017 AFL Premiership starts at 6.10pm, AWST, this Thursday evening, when West Coast Eagles take on Geelong Cats in Perth’s Domain Stadium. It could be an explosive match, as both sides still have it all to play for in the second half of the home and away season.

Both teams are also returning from a bye week. The Cats are currently third on the ladder with 32 points, four points behind GWS Giants and Adelaide Crows, who are tied after 12 matches, on nine wins and three losses.

The Crows are top of the ladder by virtue of their for/against percentage, and the Cats are actually ahead of the Giants in that regard. As both the Crows and the Giants have a bye this weekend, the last of the bye weekends in the 2017 season, a four-pointer for the Cats in Perth would boost them to second place on the ladder.

For the Eagles, lying ninth after their Round 11 loss to Gold Coast Suns, a win would take them to 28 points and a spot back in the Top 8, keeping them in contention to make the knockout stages.

Betting fans are leaning towards the Cats in Perth, even though they will be missing star goalkicker Tom Hawkins, sitting out a week’s suspension for a jumper punch on Adelaide’s Matt Crouch in Round 11. The Geelong side has brought in all-rounder Rhys Stanley to replace him, and coach Chris Scott is confident he is the forward/ruckman the Cats need to prevail.

The Eagles will have a home crowd and sheer desperation behind them, however. They have to break their three-match losing streak and return to the form that saw them win seven of their first eight games in the season, if they are going to stay in with a shot at the knockout rounds.

The two sides have met 17 times at the Domain Stadium and 49 times in total, and while the Perth team is ahead nine games to eight at home, overall they are dead level on 24 wins each, with one draw. If the Eagles can get back into the shape they were in at the start of the Premiership season, the Cats will have a serious battle on their hands.

If you’re looking for the best odds and a great variety of markets for this game, check out Ladbrokes and see what’s on offer.