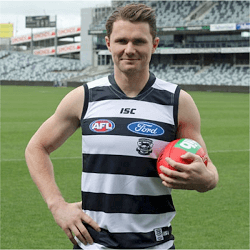 AFL star Patrick Dangerfield has won the prestigious Brownlow Medal, capping off an outstanding first season with Geelong. The dynamic midfielder joined Geelong at the start of the season, moving across from the Adelaide Crows to play at home in navy and white. Having already picked up awards for the AFL Coaches Association player of the year as well as the AFL Players Association MVP Award, the 26-year-old was always going to be in contention for the Brownlow Medal.

Dangerfield’s record win comes in his first season at Simonds Stadium. In the 2007 draft, Dangerfield was scooped up by Adelaide with pick number 10. In a bid to be closer to his home town of Moggs Creek, the midfielder sought a trade with Geelong. Dangerfield started the season with a powerful display against Hawthorn showing off his unique combination of power and pace. During the season he racked up an incredible 48 possessions during a single 12 round match against North Melbourne.

Going into the awards, Dangerfield was the shortest-priced favourite in the history of the awards. The talented player faced some stiff competition from Sydney’s Luke Parker as well as Dustin Martin and Marcus Bontempelli. At the end of the night, Dangerfield finished with a total of 35 votes, the most ever, clinching the win by an impressive 9 votes over nearest rival Luke Parker. Receiving his medal, Dangerfield took the opportunity to thank his family and his teammates. After expressing his delight in being able to reconnect with his family and thanking his mom and dad, the star turned his attention to his teammates past and present.

Dangerfield explained that he felt lucky to be involved with such a dynamic football club and that no single player stands up and receives the award based solely on their own efforts. He also took the time to honour his former Phil Walsh, who died last year. For the Brownlow Medal, Dangerfield topped the votes with 35 followed by Luke Parker with 26 votes and Dustin Martin with 25 votes. Tied for fourth place was Andrew Gaff, Dan Hannebery and Adam Treloar.

In the night’s other awards, Adelaide star Eddie Betts received the award for goal of the year for his outstanding goal against GWS. Mark Daw picked up the mark of the year gong while Jimmy Bartel revived the Jim Stynes Community Leadership award.