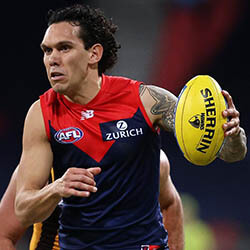 So excited/worked up was newly-retired AFL star and ex-Demon Harley Bennell about leaving the professional sporting scene, that he reportedly got intoxicated to the point of requiring a trip to a Gold Coast hospital shortly after.

According to a story ran by a local newspaper, Police on Monday received a call from a resident of Broadbeach requesting them to provide assistance at a local apartment building. The request reportedly got called in around 8 p.m., and with Police apparently discovering a heavily intoxicated Bennell upon their arrival. The entire incident ultimately led to him being driven off to hospital only hours after he announced his decision to retire.

Bennell was initially in the running for being offered a renewal of his contract with the Demons. This however got jeopardised when he was found guilty of having breached the AFL’s bio-bubble protocols during the final weekend of the season. Suspended for a total of four games, Bennell also saw to a $50,000 fine imposed on his club by the league.

The ex-Demon’s mother has in the meantime lashed out at the club’s supporters for comments expressing their anger over how he had only ever “cost the club” during his time playing for Melbourne. She described the experience of knowing her son to be stuck in Queensland with no family nearby as frustrating and concerning – not to mention a worry over his well-being and mental state.

Melbourne has in the meantime been trying to help the former player leave Queensland amid restrictions on movement and travel.