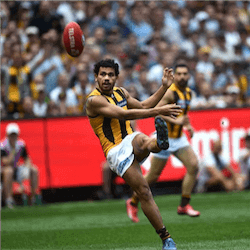 An AFL Bet to Regret

Some may call it brave, others may call it crazy, but whatever you want to call it, it’s probably not advisable to try it yourself. We’re talking about the punter that placed a $21,000 bet at three quarter time in the AFL game between GWS and Carlton.

It may have been club pride that convinced him to place the bet, but after GWS capitulated to Carlton he walked away a lot poorer. TAB has revealed that the bet was placed by a fan that has remained anonymous, right when the Giants trailed the Blues by 4 points, before the final term. What followed next was an exhilarating quarter, but it still saw the punter left out in the cold, and $21,000 poorer.

In the last quarter of the game the Giants were only one point behind the Blues, and they stayed there until Zac Fisher and Levi Casboult managed to get right in, and put the underdogs in the lead. The GWS team tried their best to get the ball near the goal, but as the final minute ticked down it was clear the game was the Blues.

When the final siren sounded, Carlton was elated as this marked their 4th win of the AFL season, and they have now risen about Hawthorn up to 16th place on the ladder. Commentator Cameron Ling summed the game up aptly after the final siren, saying that results like this were why we love footy.

There is no denying that Carlton has had a tough year so far, and they’ve been sitting at number 17 on the ladder for awhile. This win has changed their fortunes somewhat, and by moving to 16th position their confidence has been renewed. The team is hoping that this is the way of things to come, and are hoping to make their mark in their next few games too, improving their ladder standings even more before the AFL Premiership comes around.

There has been no further news on the bettor that lost 21k, but TAB says that this isn’t the first time someone has placed an almost impossible wager, and it probably won’t be the last. The bettor has gone to ground, and is probably ruing the day they ever heard of AFL. In the meantime, Carlton are hoping for bigger and better things to come.