Fresh Face for AFL Round 18 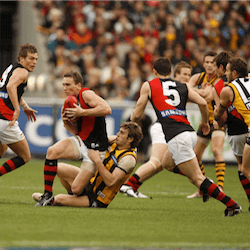 New Faces And Old Hands At Round 18

Adelaide’s face off against Geelong featured the debut of the talented young player, Alex Keath. Keath was originally picked as an AFL draft for the Gold Coast way back in 2009. He decided to focus on cricket instead and found an all rounder position with Victoria.

He did not have his contract renewed in 2014 and instead went to play league cricket for England. Eventually Keath’s journey brought him back to Adelaide and the world of grade cricket.

He played for the Strikers but again missed out on a contract with SA cricket. Now the Crows have come to his rescue and drafted the former cricketer as a Category B draft player.

A position opened up for the 198cm Keath after the injuries of both Jake Lever and Kyle Haitian. According to coach Don Pike, Keith brings a lot of spirit and great fitness to the team. If this will translate into points for the Crows remains to be seen. To debut in such a huge game is no laughing matter.

Meanwhile on the Western Bulldogs side, Easton Wood has just reiterated his commitment to the team. The current team captain, Wood guided the Bulldogs to their Premiership Gold last season and now has re-signed with the club until 2020.

List manage, Jason McCartney stated that Wood is an essential part of the team’s make up and that he cannot speak highly enough of Wood as a player and an individual. Despite the current team failing to set the AFL on fire, the Bulldogs have re-signed 10 of their current players, including Jason Johannisen who signed a 5 year contract.

Travis Cloke is not thought to be included in Saturdays game, Jake Stringer is out with an injury along with Jake Redpath.

Caleb is convinced that it won’t hurt the team’s confidence and with Wood at the helm, there is no reason why the team shouldn’t be in high spirits. Let’s just hope that their confidence is not their undoing this coming Saturday. The Suns will need to capitalise on any advantages they can spot if they wish to overthrow the bulldogs.