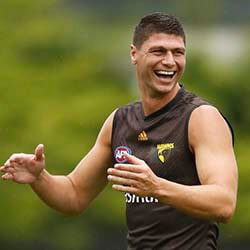 Hawks star Jon Patton has reportedly been hospitalised amid an ongoing AFL investigation into allegations of inappropriate sexual conduct and lewd behaviour on social media. He is currently receiving in-hospital treatment for his mental health.

The AFL’s Integrity Unit is investigating several complaints by multiple women who all claim to have been harassed by Patton on social media. The key forward is being accused of having sent explicit messages and photos to the complainants without their consent. Patton was relieved of all duties by the Hawks earlier this week.

Hawks CEO Justin Reeves this week issued a letter to members posted to Hawthorn’s confirming the 2011 No. 1 pick’s hospitalisation, as well as the reason for the admission, being that of ongoing management of his state of health. Reeves furthermore expressed the hope that Patton’s privacy would be respected as he tries to make his way towards recovery, and said that the club would ensure that he (Patton) receives the necessary support during a very difficult time for all involved.

Reeves confirmed that although the club’s own Integrity Committee was already working together with the AFL’s Integrity Unit so as to properly investigate the complaints within the parameters of the league’s Respect and Responsibility Policy, the expectation is that the finalisation of the process will take some time.

A statement issued by Hawthorn on Saturday stresses that the nature of the allegations allude to the type of behaviour that does not reflect the actual values and standards of the club itself.

Patton has apparently denied all allegations of inappropriate behaviour.