Aberro In With A Chance At Champagne Stakes 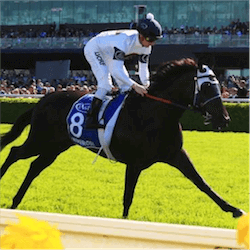 Aberro Gets a Crack at Champagne Stakes

Aberro, the Colt related to Matt Laurie’s two biggest performing horses will get a good crack at a Group 1 race early on in his career. Aberro is set to run in Saturday’s $500,000 Champagne Stakes at Randwick. After starting seconds in the Peckham maiden and Mornington Sires, the 1600 meter Champagne Stakes will be Aberro’s third start in his short career. The colt has a pedigree that Laurie is hoping to capitalise on.

Aberro’s relations include the 2013 South Australian Derby Winner Escado as a three-quarter brother. He is also the half-brother of a Se Sauver, the winner of the 2013 Edward Manifold Stakes. Speaking to the press about his chances, Laurie said that the race is worth a lot of money and usually has a small field. According to Laurie, Aberro has come through his two runs well and thinks the mile will suit him. That being said, Laurie acknowledges that he will probably do a lot better next time around.

Felling like he had nothing to lose, Laurie took Aberro to Canberra for a barrier trial. Running in a clockwise direction to gain more experience, the colt subsequently won his 900-meter heat against three unraced horses. While Laurie would have liked to have had more experienced horses on the track, the run helped the colt settle in and finish off. After a second gallop this week, Aberro will head to Sydney to prepare for the Champagne Stakes, which attracted a total of 15 early nominations.

Of the early nomination, Sire’s Produce Stakes winner, Invader leads the betting with odds of $1.90. Frolic, the Golden Slipper runner up was initially in at $4.60 but has subsequently pulled out of the race. This leaves things open for Aberro who comes in at $15.00. Currently Whispers Secret is in at number two with odds of $4.60 and The Mission in at number three at odds of $8.50.

While his distant brother Escado raced as a gelding, Aberro will get his chance to prove his worth as a colt. Weir has stated that will give the horse the opportunity to race as a colt, if he is unable to perform, he would be gelded. But if he manages to win the Group 1 event, Weir feels that he has a good enough pedigree to stand.