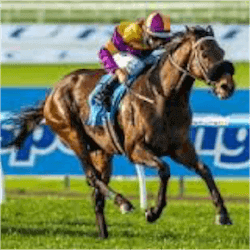 St Jean Out of Auckland Cup

Online sports betting fans that were considering St Jean for a long-shot bet in the Auckland Cup on Saturday, 11 March, will have to take another look at the middle of the betting table. Australian punters looking for wins of $12.00 or more should perhaps look at Savaria, Jacksstar, El Soldado or Lord Van Percy instead.

St Jean, a 6-year-old entire who began his career in Ireland, then enjoyed some 2014 success in Australia before moving to New Zealand racing in November last year, has been withdrawn from the $500,000 Auckland Cup after developing a puffy tendon.

With five wins and one second placing from 12 starts, St Jean might have been capable of a surprise in Auckland on Saturday. He showed his mettle in the City of Auckland Cup on New Year’s Day, winning by a nose over 2400m, and it was hoped he’d impress over the Auckland Cup’s 3200m.

However, Donna Logan and Chris Gibbs decided to withdraw him after he developed a puffy tendon, and also announced that he will be retiring from racing; they are currently considering options regarding putting him out to stud. He won a total of $325,249.00 in his career.

The Logan-Gibbs stable suffered another blow, when they had to withdraw Romancer from the New Zealand Derby at the start of Auckland Cup Week, after he suffered a minor tear in his heel.

Tony Pike-trained mare Chenille, winner of the 2200m Karaka Stayers Cup at Ellerslie in January, has most punters backing her for a return win at the longer distance. The 5-year-old was at $5.50 in ante-post betting, with Mister Impatience and Pentathlon at $8.00 and Fanatic and Five To Midnight at $10.00.

However, if the weather is wet and the track conditions slow, powerhouse El Soldado or proven Australian stayer Lord Van Percy could well outdo the younger horses over two miles at Ellerslie. Both were being offered at $20.00 in ante-post betting.