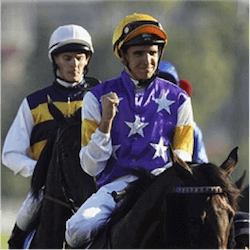 Saturday saw the running of Day Two of ‘The Championships’ at Royal Randwick, as well as the Sydney Autumn Carnival’s arrival at the famed racecourse. It was also Australian Oaks Day, in honour of Australia’s premier stayers race for fillies.

The $1-million Australian Oaks for 3-year-old fillies at set weights of 56kg over 2400m was the first of four Group 1 races on the card, along with the $4-million Queen Elizabeth Stakes, the $2-million Sydney Cup and the $1-million Queen of the Turf Stakes. The collection of rich purses attracts strong fields, and Australian punters had plenty of betting options to consider.

Fresh from her win last month in the New Zealand Oaks, Bonneval started the Australian Oaks as joint favourite at $4.20 with Nurse Kitchen. Although slow getting out of the gate, Lasqueti Spirit made up ground and by the top of the final straight, she and Perfect Rhyme were at least 150m ahead of Bonneval at the head of the field.

However, the New Zealand filly made up the ground powerfully when given free rein by jockey Hugh Bowman, winning by 4.5 lengths, with Perfect Rhyme second and Lasqueti Spirit third.

The Australian Oaks wasn’t Bowman’s only triumph of the day; he was also mounted on 5-year-old mare Winx for the 2000m Queen Elizabeth Stakes. The Sydney champion was by far the race favourite at $1.20, her lowest-ever starting price. She and Bowman didn’t disappoint, winning by more than five lengths.

This brings Winx’s unbroken winning streak to 17, hot on the heels of other racing legends like Ajax on 18 and Desert Gold on 19, and just eight victories behind Black Caviar’s all-time record of 25. Saturday’s prize money also bumps her career earnings up to $12.9-million, less than $2-million behind the Australian record.

Tragedy struck in the third Group 1 race of the day: the 3200m Sydney Cup. A broken hind leg coming out of the straight on the first circuit of the track saw 6-year-old Almoonqith throw his jockey, James Doyle. Blake Shinn was also dislodged from Who Shot Thebarman, and with the riderless horse loose of the track, stewards had to declare a no-race.

Unfortunately, Almoonqith had to be put down, but no other horses or jockeys were injured. The race has been rescheduled at Randwick on 22 April.

Even though the Queen of the Turf Stakes is over, there’s still plenty of wagering action to enjoy. Bettors looking for a good deal this weekend can take advantage of Sportsbet’s bonus offer on Friday in Ascot Races 1-3.  In races 1-3 at Ascot this Friday if your horse runs 2nd or 3rd you’ll get up to $50 back in Bonus Bets!