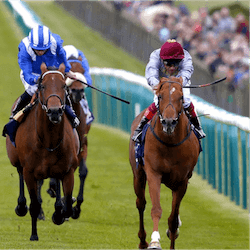 Irish colt Churchill was the undisputed champion of English racing’s two-year-olds last year, debuting with five wins, all over 1400m, from six starts. Only in his maiden race, over 1200m, did he fall short, and even then he managed a third. On Saturday at Newmarket, the 3-year-old proved that he’s ready to take on longer races.

Like all English races, the 2,000 Guineas Stakes is non-metric, run over the Rowley Mile (1609m) at the famous Suffolk racecourse. It’s a Group 1 race, usually the first of five Classic races in the English racing season, and the £500,000 purse for the 2017 Qipco 2,000 Guineas Stakes attracted a strong field and plenty of online betting.

Australian punters backing the favourite were delighted to see Churchill romp home at 6/4, or $1.50. Jockey Ryan Moore got him behind the pacesetters early, and a beautifully timed surge for the rail saw him clear of the field. He held the lead over the final furlongs to give trainer Aiden O’Brien a record eighth Guineas victory. Churchill finished a length ahead of Barney Roy, with Al Wukair third by a head.

The 2,000 Guineas Stakes’ position as opening Classic of the season isn’t the only reason the race has revered status in England. The Guineas is also traditionally the first leg of English flat racing’s Triple Crown, which comprises the Guineas, the Epsom Derby and the St Leger Stakes.

Each race is progressively longer, with the Derby at Epsom Downs in Surrey run over 2423m, and the St Leger at Doncaster in South Yorkshire is run over 2937m. It definitely sorts out the sprinters from the stayers, and only 15 horses have won the English Triple Crown in more than 150 years.

The last Triple Crown champions were the legendary team of Nijinsky and Lester Piggott, back in 1970. The last horse to win both the Guineas and the Derby was Camelot in 2012, but his Triple Crown hopes were dashed by a second place to Encke at the St Leger.

Churchill’s owners have yet to indicate whether he will be entered in the Derby, scheduled for Epsom Downs Racecourse on 3 June. If he is nominated for the race, however, Australia’s betting community will be watching the blossoming young sprinter avidly. If he has the stamina to win at Epsom, they could be witnessing the arrival of both a Triple Crown winner and a champion stayer of the future.