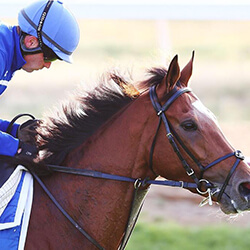 Godolphin’s Cross Counter has claimed victory at the Melbourne Cup, Australia’s most prestigious race while setting a number of firsts and giving jockey Kerrin McEvoy his third trophy yet.

The British horse fought for the win over 24 opponents, despite the heavy downpour of rain that completely soaked both the audience and the 3200-meter track at Flemington Racecourse.

Cross Counter, who was trained by Charlie Appleby, is the first British-bred horse to win the Cup. Taking home a cool $2.8 million prize, and beating Marmelo and A Prince of Arran, who took second and third places respectively. It also marks the first win for the mega-stable Godolphin, which was started by UAE and Dubai ruler Sheikh Mohammed bin Rashid Al Maktoum.

Trainer Appleby told reporters after the event that it was a great win for both the team and the stable. He added that he felt lucky to be in the position that he’s in, and that he’s grateful to Sheikh Mohammed for giving him his position.

It wasn’t a good day for everyone, and Irish-trained horse ThecliffsofMoher, ridden by Ryan Moore, was forced to be put down after the horse pulled up lame, making it the sixth horse to die in the event since 2013. Yucatan, owned by Lloyd Williams and trained by Aiden O’Brien was the strong favourite for the race, but the harsh rain changed the event entirely, leaving every rider and horse on their own fighting against the downpour.