Fell Swoop to Race at Oakleigh 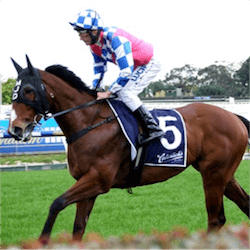 Fell Swoop is set to make his first appearance of 2017 at the Oakleigh Plate. Trainer Matthew Dale has said that he may also appear in the Lightning Stakes. Fell Swoop may not have won any races last year but his powerfully consistent performance has made him a horse to watch this year.

Dale believes it is this consistent foundation that will fuel a strong performance for Fell Swoop at the elite events scheduled for this year in both Melbourne and Sydney.

Dale said that it is an amazing record, despite the no wins. Currently he and his team are planning out a program for Fell Swoop to eventually be third-up for the TJ Smith Stakes. Currently he will be having a trial race in Canberra to be first up at the $ 500 000 Oakleigh Plate in February.

So far Fell Swoop has won 9 events out of 19 starts. He was purchased by dale in 2013 and has earned the trainer more than $ 1.3 million.

Dale does not feel that the horse needs to improve. He believes that if the horse puts up the same performance of last year, a group 1 win will happen naturally. He feels that so far the right moment has not presented itself yet for Fell Swoop, but he can feel a win is at hand.

The only concern for Dale is the fresh new 3 year old sprinters that will be entering this year’s races. He is less concerned with his other running rivals, the excellent Chautauqua, Flying Artie, Astern and Extreme Choice.

Darren Weir, trainer of fiery sprinter, Hellbent, has also revealed that the Oakleigh Plate will be the horse’s first race of 2017.

So far Hellbent’s performance has not been consistent enough. His trainer stated that he is a magnificent horse with great ability but he is not easy. He said that his team will continue working with Hellbent to help fully realise its potential.