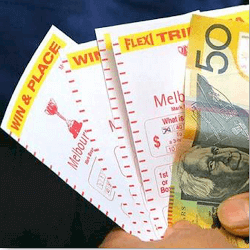 The Biggest Wins at the Melbourne Cup

The Melbourne Cup is one of Australia’s premier horse races. It draws in punters from all over the world as the best of the best compete at Flemington Race Course. This year, punters and spectators were in a for a real thriller as the Almandin and Heartbreak City were neck and neck going down the home straight. It was Almandin ridden by Kerrin McEvoy, who was able to pull ahead to claim the converted Trophy. Heartbreak City came in second with Hartnell in third, and Qewy in Fourth.

For one lucky punter, the race results couldn’t have been better. Placing a $10 wager, the extremely fortunate punter pulled off the unthinkable by correctly guessing the first four finishers in the race. This effectively turned a $10 bet into a whopping $240 000 win. At the end of the day, online bookmaker SportsBet paid out more than 13 Million dollars to a total of 80 000 punters who placed bets on Almandin. This included two punters who got in with bets of $301. One punter placed $100 bet to collect a hefty $30,100 payout while another invested just $20.

The biggest single wager on Almandin was a massive $5465.70 at $11. This resulted in a handsome return of $60,122.70.  Another punter also chose to go high placing $5,000 on the horse at $11. The return for this punter was a cool $55,000. Speaking to the press, Christian Jantzen from SportsBet said that punters truly outsmarted them by continually backing Almandin at ridiculously high odds, and it really paid off or those who opted to wager this way.

In Victoria, a local TAB punter was also able to correctly guess the first four places to turn a single $1 bet into a tidy $24 000 return. There were a number of TAB punters who backed Almandin including one lucky punter who placed a very brave $5000 bet on the horse at $14. The collect on the wager turned out to be a whopping $70,000. But for many punters, it was not all good news. Heartbreak City was backed as one of the favourites to win the $6 million Melbourne Cup and just failed to deliver.

The French bred horse was a last-start winner of the Ebor Handicap and looked to claim another title heading down the home straight. Ultimately Heartbreak City held true to its name and fell agonisingly short to place second by just one fifth of a length. Had the horse pulled off the win, one punter would have been heard cheering louder than others. After placing a $37.50 four-leg multi bet, the punter would have walked away with a $114,750 win if Heartbreak City placed first.