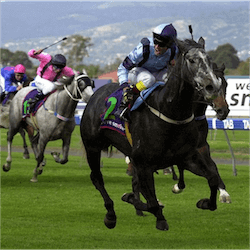 Even though Odeon was not a leading contender at the beginning of the Mornington Guineas, by the final 200 metres he had pushed forward past Star Patriot and Red is the Rose and took the win in a spectacular fashion by an incredible two-and-a-quarter lengths over the 2nd place winner Star Patriot. By comparison, Red is the Rose who finished in 3rd place, was three-quarters-of-a length behind the 2nd place winner, further proving Odeon’s incredible finish. His jockey, Jamie Mott was not surprised by this win as he had spoken to fellow jockey Damian Lane ahead of the Mornington Guineas after Odeon’s win at the Bendigo 1400-metre race. Lane assured Mott of Odeon’s racing power as the horse had won the Bendigo despite having a few things up against him.

Not only does Odeon have the hearts of jockeys Jamie Mott and Damian Lane, but he is also a particular favourite of his trainers Mathew Ellerton and Simon Zahra. After his Mornington Guineas win, Zahra stated that Odeon sustained a long run and won well. It would seem that Odeon has winning blood running through his veins, as he is the son of Zacinto who gained 3 wins and 2 placings from 11 starts during his 4-year racing career. Zahra has stated that he will have to see how Odeon does during the handicappers, before his position in the South Australian Derby can be secured. However, owing to the fact that the 2017 Mornington Guineas was a full 100 metres longer than ever before, Odeon’s trainers have full confidence that he will excel at the handicappers.