Odeon Up for South Australian Derby 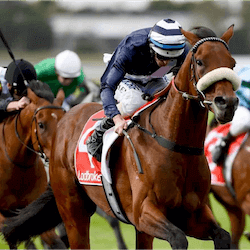 When he started the 2000m Mt Dandenong Handicap at Caulfield on Saturday, Ellerton/Zahra-trained gelding Odeon was already the favourite for Morphettville’s South Australian Derby on 13 May. He was the $4.80 favourite at Caulfield too, and he rewarded punters’ faith with a convincing win by more than a length against older horses.

The last time the 3-year-old ran a 2000m race at Caulfield, he finished sixth of 13. Saturday’s win, his longest distance to date, brings his record to 11: 4-2-0, and Australian betting fans are now expecting him to stake his claim as a great stayer to watch in the 2500m Group 1 South Australian Derby. From $6.00 last week, his ante-post odds have shortened to around $4.20.

The Derby is one of the most renowned distance races in Adelaide’s Autumn Racing Carnival, and this year it sees a boosted purse of $600,000. Restricted to 3-year-old fillies, colts and geldings carrying set weights, it is also seen as the perfect race at which to identify the champion stayers of the future.

Bloodlines as Important as Form

As the Derby is restricted to 3-year-olds, with no record to consider over 2500m, breeding is something punters will want to consider as much as current form when picking a winner. In the past ten races, the favourite has won six times, but Odeon is not without strong competition in the Derby field.

Waging War, sired by 2009 Derby winner Rebel Raider, is another option to consider on 13 May. After winning the 2030m Group 3 Chairman’s Stakes at Morphettville on Saturday, the gelding has three wins in a row and a career record of 10: 4-0-2.

Savabeel-sired Grand Chancellor, the colt that finished second to Waging War in the Chairman’s Stakes, is also in with a shot at the Derby, with a record of 7: 3-2-0. Both horses are currently at $11.00 in the betting.

There are two other colts near the top of the betting that could challenge for the Derby: Ruthven and Rockstar Rebel, both currently at $7.00. Gelding Volatile Mix is being offered at $9.00.

Punters will also be looking for promising Derby fillies in the 2000m Group 1 Australasian Oaks at Morphettville this Saturday. Favourite Savvy Dreams may be worth watching: she is being offered at $21.00 to win the Derby.