Queen of the Turf Stakes to Foxplay 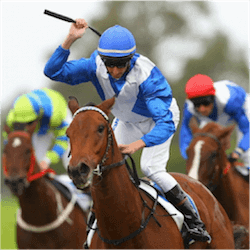 The decision by trainer Chris Waller to drop 3-year-old Foxplay back in distance, entering her for the 1600m Coolmore Legacy Queen of the Turf Stakes instead of the 2400m James Boag’s Premium Australian Oaks at Randwick on Saturday, was obviously spot-on. The filly, ridden by Kerrin McEvoy, won the Queen of the Turf Stakes in fine style, securing her first Group 1 win and bringing her record to five wins and three seconds in 13 races.

Race favourite Silent Sedition was an early leader, with a challenge from First Seal keeping her pressured up front. Despite having to ride wide to get clear of half of the field in the final straight, a strong closing gallop saw Foxplay clinch it by half a length.

By the finish, Silent Sedition had faded back to fourth place, with second-favourite Dixie Blossoms in third. Second place went to outsider Zanbagh, making the most of the soft conditions.

The Queen of the Turf Stakes was the last of four Group 1 races run at Royal Randwick on Day Two of ‘The Championships’, but is was run in a slightly subdued atmosphere, after a tragedy had abruptly halted the preceding race. The 3200m Sydney Cup was the most anticipated race for stayers of the day, but had to be called off after 6-year-old entire Almoonqith broke his hind leg on the first circuit of the course and had to be destroyed.

Apart from Almoonqith’s own jockey, James Doyle, the accident also unseated Blake Shinn from Who Shot Thebarman, and with a riderless horse loose, stewards had no option but to declare a no-race. It has been rescheduled for Randwick on 22 April.

No Surprises in Queen Elizabeth Stakes

Saturday was also Queen Elizabeth Stakes Day, celebrating 25 years since the monarch granted Randwick the appellation ‘royal’. The $4-million race over 2000m was the main attraction of the day, but at $1.20, the lowest winnings ever offered on champion mare Winx, Australian punters were resigned to a one-horse race.

As expected, the 5-year-old sailed home more than five lengths, and jockey Hugh Bowman secured his second win of the day. In the preceding race, the Australian Oaks, he won by four-and-a-half lengths on three-year-old New Zealand filly Bonneval.

The Queen Elizabeth Stakes win means that Winx now has an unbeaten record in 17 consecutive races. If she remains undefeated next season, she is on track to outstrip the records of racing legends like Ajax, Desert Gold and Black Caviar. Her career earnings now stand at $12.9-million, so she needs less than $2-million more to take another all-time record.

Bettors who want to get in on this weekends action at Randwick can take advatage of Sportsbet’s  Saturday Racing Offer on Races 1-4. In races 1-4 at Randwick this Saturday if your horse runs 2nd or 3rd get up to $50 back in Bonus Bets!