Racing Up: Redzel In, Winx Out 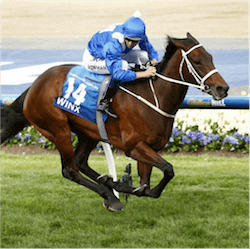 Saturday, February 17, brings premier racing action in Melbourne and Sydney to entertain Aussie sports betting enthusiasts. Flemington will host arguably the highlight of the weekend’s racing: the Gr. 1 Black Caviar Lightning, as the Lightning Stakes has been rechristened.

The field for the weight-for-age Black Caviar Lightning has yet to be finalised, but champion sprinter Redzel looks almost certain to start. The five-year-old gelding trained by father-son team Peter and Paul Snowden hasn’t lost a race in the six starts he’s had since April last year, and he boasts a career record of 21: 11-4-1.

In a barrier trial at Rosehill last week, at which Redzel wore his race day blinkers and was ridden by race day jockey Kerrin McEvoy, he sped away over 1000m to finish three lengths clear of Alizee in second. As a result, he’s at just better than even money to win the Black Caviar Lightning in antepost betting, with online sports betting sites offering him at around $1.10.

Winx Out of Apollo Stakes

The horse that surprisingly didn’t do too well in the Rosehill barrier trial was another noted champion, Winx. The six-year-old mare finished well back in the field, and as a result trainer Chris Waller won’t be running her in Sydney’s big race on February 17: the 1400m Gr. 2 Apollo Stakes at Royal Randwick.

The other factor influencing Waller’s decision is the failure of Winx’s regular jockey, Hugh Bowman, to get a careless-riding suspension downgraded last week. His seven-race-day suspension stands, and Waller has decided not to put Winx into the Apollo without him – although she may still entertain fans at Randwick with a barrier trial between races on Saturday.

With Winx out, the top of the antepost betting for the Apollo Stakes is topped by Trapeze Artist, Foxplay, Hartnell, Comin Through and Egg Tart, all offered at below $10.00 at online betting sites.