Racing Results From The Spring Carnival 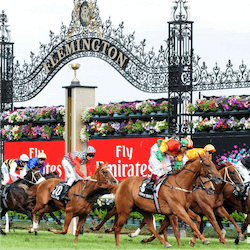 Three big races and loads of betting action was the order of the day with the Epsom Handicap, the Metropolitan Handicap and the Flight Stakes heating up the Spring Carnival. First up, we take a look at the 2017 Epsom Handicap. This prestigious Group 1 race is held over a distance of 1600 meters at Randwick Racecourse. It offers up a total prize money of a whopping $980,000.00 and is a major event on the Australian racing calendar. Betting on these, the Turnball Stakes and other races is all made easy at Crownbet, and you can wager online in a matter of minutes.

A Big Day for Happy Clapper

This year it was race favourite Happy Clapper who took the honours. A confident ride by Blake Shin ensured that the Pat Webster trained horse fired out of the gates and followed both Red Excitement and Saville Row into the home turn. Shin then had Happy Clapper at full tilt down the straight, just managing to hold off Tom Melbourne who took the runners up stall. Third place went to Lindsay Park trained Snitzon who had an impressive run from the back of the field.

Dating back to 1863, the Metropolitan or Metprop is it is locally known is the only 2400m race along with the Caulfield Cup on the Australian Group 1 calendar. It is run under handicap conditions for 3 year olds and aged horses of 50kg.  Also held at Randwick the Metropolitan proved to be an interesting race as the favourite, Life Less Ordinary finished all the way at the back. It was the eight-year-old gelding Foundry who took the honours this time around. With Jockey Michael Dee at the reins, the Team Williams runner beat out Big Duke by half a length, finding an extra bit of pace in the final 200 meters. Chocante came in third to make up the first three.

The Flight Sakes is another Group One Race for three-year-old fillies. Randwick Racecourse played home the race on the Epsom Handicap Day boasting a prize pool of half a million dollars. The set weight conditions race is a highlight of the racing calendar and brings out some of the biggest betting action. The Flight Stakes was a buzz this year as Godolphin filly Alizee charged home to win the race. The James Cumming trained horse was the race favourite and proved to be worth her status. She came home two lengths ahead of Champaign Cuddles in second while Celargirl topped off the podium in third.