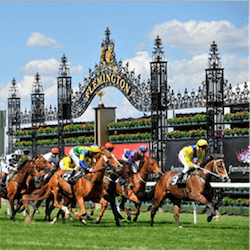 Sydney is drawing the lion’s share of horseracing fans’ attention right now, with the $10-million The Everest debuting this Saturday; the richest race in the world. However, online sports betting enthusiasts are fortunate enough to have all the weekend’s racing available at betting sites, so it won’t have escaped them that this a bumper racing weekend for Melbourne, as well. Saturday is Caulfield Guineas Day, and Sunday brings the Cranbourne Cup.

On Saturday, Caulfield hosts another iconic Melbourne race: the Group 1 Caulfield Cup for 3-year-olds and older, run over 2400m. It carries prize money totalling $3-million, so despite the hype around The Everest sprint, it’s rewarding enough to attract some top-class stayers. You can get in on the action at Crownbet and back the horse you want to see in the winners circle.

One of the races on this Saturday’s Caulfield Guineas Day card is the million-dollar Caulfield Stakes, a 2000m Gr. 1 weight-for-age race, also open to 3-year-olds and older. Many punters will be following the Stakes results carefully, as it’s often a handy precursor to the Cup, with several horses nominated for both races.

In fact, some trainers and owners will only make the decision whether or not to go on to the Cup next Saturday, based on their horses’ performance in the Caulfield Stakes this week. So although ante-post betting is already open on early Caulfield Cup nominations, there are more than 40 horses on the list. It should be trimmed considerably by the time final acceptances are named next week.

Punters may therefore want to hold off on placing their Cup bets until the field is finalised. That said, some of the horses in the Caulfield Stakes this week are most likely to return for the Cup, so an early bet at better odds could pay off.

New Zealand 4-year-old mare Bonneval, despite a barrier draw of 11 in a field of 11, is leading the betting in the Caulfield Stakes, at $3.00. Close behind her is British 7-year-old gelding Hartnell, drawn at Barrier 7, at $3.40. Both horses are expected to return next Saturday, with Bonneval offered at $3.50 and up in the Caulfield Cup, and Hartnell at $12.00-$16.00.

Single Gaze, Marmelo, Jon Snow and Johannes Vermeer are also currently nominated for the Cup, but betting fans will want to see how they do in the Caulfield Stakes first.