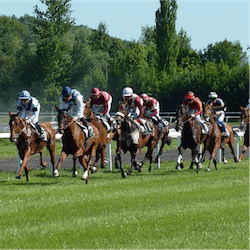 Amid all the Derby Day and Melbourne Cup excitement, Australian online sports betting fans shouldn’t forget that Perth hosts an iconic meeting on 4 November too. The 1000m Group 3 Prince of Wales Stakes is a famous sprint at the grand old lady of Aussie courses, Ascot, and presents another option in the weekend’s sports betting mix.

The weight-for-age sprint has been held since 1969, and this year boasts a field of 11 final acceptances. Current favourite is 4-year-old mare Caipirinha at $3.60; with all four of her wins from 14 starts taking place at Ascot, she’s reckoned a track specialist.

Returning from an 18-week spell, however, Caipirinha finished fourth of eight and third of nine in her two October outings, over 1000m and 1100m respectively. She’ll be up against another Ascot specialist: 6-year-old gelding Profit Street. He took a third, a second and two firsts from four races in July, and he’s coming back after a rest at $4.20 in the betting.

Caipirinha has the best draw in Barrier 1, but Profit Street will have no trouble starting from Barrier 4. Third favourite, in Barrier 5, is Dainty Tess at $4.40. The 4-year-old mare has been the horse to beat in the sprints at Ascot and Belmont Park all year, and she may well be the smart bet for the Prince of Wales.

The other major race on Ascot’s 4 November card is the 1400m Gr. 3 Asian Beau Stakes; a quality handicap. Like the Prince of Wales, it offers $150,000 in total prize money. The favourite is 6-year-old mare Cosmic Storm at $2.70, despite her draw in Barrier 9 for a 10-horse race. She’s coming off a fourth-place finish in a field of 11 over the same distance at Ascot two weeks earlier.

She could see several challenges, however: Variation in Barrier 3 is at $4.80, and Tradesman in Barrier 6, Royal Star in Barrier 5 and Whispering Brook in Barrier 1 are all offered at $5.50.