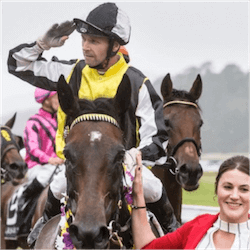 Holds out for Win at Wellington Cup

After winning the New Zealand Oaks as a three-year-old, Savaria hadn’t produced anything special on the track. This year, she was in fine form, winning the Wallaceville Estate Wellington Cup Day race by a nose. The daughter of famous runner Savabeel, showed her staying power as she fought out the 3200-meter race, going head to head with the race favourite, Jacksstar.

Despite the weather, the Wellington Cup proved to be an exciting race. Savaria started the race at the back of the field. With one circuit down, the mare was a full twelve lengths behind the leaders with jockey Haden Tinsley seemingly content to let her follow on at loping gait. At 800 meters, Savaria seemed to wake up, throwing her head into the air and powering toward the front of the pack.

At the 600-meter mark, Savaria dropped back to last place before charging once again. Tinsley coaxed her forward once again, edging toward the front by 250 meters. Over the final 100 meters, Savaria lined up with the other eight runners and thrust her head out to claim the win by less than a head. Jacksstar, the clear favourite on the day was straggling in last place at the 1000-meter mark. She moved forward at a steady pace and was widest turning into the home stretch. The mare found an extra bit of pace and motored down the final 100 meters, just not being able to get past Savaria over the line.

After placing second at the New Zealand Cup over a similar distance, Perfect Star had a bit of a rocky start, eventually charging home for third place. Fanatic took fourth place while last year’s winner, Mister Impatience came in a disappointing fifth. Snow Secret seemed to be held up in the straight and managed to stride in for seventh. The Australian visitors didn’t fare well with Pop ‘N’ Scotch finishing out of the money in eighth while Sly Romance finished last.

As Savaria crossed the finish line to claim the $250,000 race, Roydon Bergerson and all the stable supporters celebrated with hugs all round. Speaking to the press, Bergesrson said he was a bit worried as they approached the turn, but it was a patient ride from Tinsley in the end. Savaria’s owners, Des and Kay Fleming were not present at the race. The Taranaki farmers had been put off by the bad weather as Savaria reportedly does not like running on wet tracks.