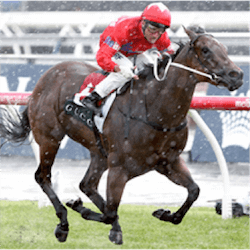 Secret Agenda is the Sapphire Stakes most recent winner as she took 1st place in the Group 2 filly race on April 8th 2017. The 1200-metre horseracing event takes place on the 2nd Saturday in April as part of the annual Sydney Autumn Racing Carnival at Royal Randwick Racecourse. This year, the Melbourne born 4-year-old filly was fortunate enough to take the 1st place win by a full 1-1/4 length over Missrock and Artistry who took 2nd and 3rd place respectively. Secret Agenda has secured her trip to Adelaide with the Sapphire Stakes win, where she will be participating in the Goodwood Handicap and Robert Sangster Stakes.

Both upcoming races are Group 1 Thoroughbred 1200-metre sprints and form part of the Adelaide Autumn Carnival hosted by the South Australian Jockey Club at the Morphettville Racecourse during May 2017.  Secret Agenda will no doubt be up against some stiff competition in both weight-for-age races, but her trainer Mick Price has every confidence that she can take the win as she an excellent wet-tracker, which is what gave her the necessary boost to take the Sapphire Stakes in the first place.

Even though Secret Agenda came in 2nd place in the 2016 Sapphire Stakes, with Mick Price’s guidance she managed to sail into 1st place by an incredible 1-1/4 length in this year’s 1200-metre sprint. Mick Price is looking forward to testing Secret Agenda’s abilities at this year’s Goodwood Handicap and Robert Sangster Stakes, which are both, for the first time in history, worth $1 million. The Australian government has put $6 million in, effectively doubling the Goodwood Handicap purse, and increasing the Robert Sangster Stakes purse from $400,000 to $1 million. Race organizers are incredibly excited to be able to offer the $1 million purses, as Adelaide was – until very recently – the only mainland state that did not offer million-dollar races during their premier carnival.

In 2010, Price trained the 4-year-old filly Velocitea to take success with the 2nd place in the Robert Sangster before taking 1st place at the Goodwood Handicap in the same year. Price has prepared over 100 winners a season over the last 10 years, making him the best bet to take Secret Agenda to a possible double win at this year’s Autumn Carnival.