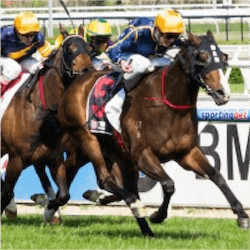 Saturday, December 16 brings Perth racing fans the AJ Scahill Stakes at Ascot; a 1400m Group 3 weight-for-age gallop for three-year-olds and older with prize money of $250,000. Inaugurated in 1978 and granted Gr. 3 status in 1979, the race is being run for the 40th time this year.

Fans of Adam Durrant-trained mare Silverstream were pleased to see her pronounced fit and included in the nine final acceptances for the AJ Scahill. The six-year-old was scratched from last week’s Kingston Town Classic at Ascot when she developed a foot abscess, but that has now cleared up.

Carrying the Lightest Weight in the Field

Silverstream was looking strong in October and November, before her foot started troubling her. She finished second of seven at Belmont Park over 1200m, followed by two wins at Ascot over 1400m, in the Gr. 3 Northerly Stakes on October 21 and the Gr. 2 Lee Steere Stakes on November 11.

The abscess became apparent after she finished 13th of 16 in Ascot’s million-dollar Gr. 1 Railway Stakes on November 25. Now that she’s back in business, online sports betting enthusiasts will also be pleased to know she’s carrying the lightest weight, at 57kg. The other eight horses in the race will all carry 59kg.

She’s drawn in Barrier 5, and will be ridden by Clint Johnston-Porter, a jockey whose most successful career partnership to date has been with Durrant-trained horses. Nevertheless, she’s probably going to start around fifth in the betting, so she could be a profitable outsider.

Champion trainer Darren Weir goes into the AJ Scahill knowing there’s at least one competitor he doesn’t have to worry about.

After a disappointing season at Ascot, WA former champion two-year-old Whispering Brook was withdrawn from contention for the AJ Scahill, and will in fact now pass into Weir’s care in Victoria. He’ll be working to either extend her racing career, or else prepare her for sale as a brood mare.

Her withdrawal means Weir’s AJ Scahill entry, Ulmann, faces one less threat. The six-year-old gelding could surprise, despite a nasty barrier draw of 8.

But more likely to give Silverstream a run for her money is probable favourite Variation, followed by Profit Street, State Solicitor and Properantes.