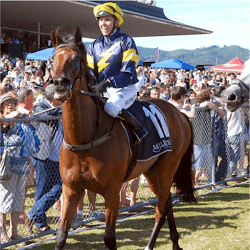 Get Set for the Group 2 Wellington Cup

The Wellington Cup is a Group 2 Thoroughbred horse race that takes place once a year, in January, at New Zealand’s Trentham Racecourse, located in Trentham, by the Wellington Racing Club.

It is by far one of the most important horse races in New Zealand, and currently makes a purse of NZ$250 000 available to the winner. Given the race’s prestige and renown, there was certainly a lot of disappointment over the news that the races was losing its Group One status from 2009 onwards, and the Wellington Racing Club’s response was to downgrade the length of the race, reducing the distance from 3 200 metres to 2 400 metres in order to continue to be able to attract a higher-quality field.

There is something to be said about a day at the races: the wonderful atmosphere; the fun of getting dressed up in outrageously glamorous outfits; having a punt with friends while you enjoy the races and root for your pick to win; and taking part in the excitement of the horses approaching the finish is hard to beat.

The Wellington Cup Race of 2017 is sure to suit almost everybody’s style; group dynamics; and, most importantly, budget. There are links provided online that will help you buy your tickets and browse the information you require in order to get your first-rate experience of this wonderful event on the go.

Thanks to how connected the world is these days, however, by means of the internet, you do not necessarily have to be at the Trentham Racecourse itself in order to enjoy the fun of the Wallaceville Estate Wellington Cup horse race next year, and can get involved in the betting action so widely provided for online if you wish to. Gather your friends and family together and watch the televised race, and have fun from wherever you are with it when you do as well, and get involved in the most important horse race in New Zealand that way.