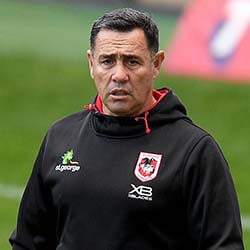 Ex-Cronulla coach Shane Flanagan says although he hasn’t yet formally approached the NRL about making a possible return out of deregistration, he’ll be doing exactly that in the event a head coach job should open up before his suspension expires on Nov. 1.

He however strongly denies all rumours insinuating that he’d already been in contact with the league about a possible early comeback. The NRL previously indicated it would be open to considering allowing Flanagan a mid-season early return in the event that a suitable position did open up.

The 2016 premiership-winning coach was deregistered for an indefinite amount of time in December 2018. His punishment followed information that had come to light bout his having had open communication channels with the Sharks while still serving a year-long ban for the club’s anabolic steroids scandal. Then in September 2019, only a little more than 9 months on, Flanagan was allowed leeway to return in an assistant coach capacity. He was at the time cautioned that he would not be permitted to take on a head coach position.

Flanagan on the weekend told a prominent sports media house that coaching was what he did, and what he loved to do, and that he considered himself good at it too. He said that although he acknowledges having made some mistakes, he’s learnt from everyone. He added that he’s no longer the coach or the person he used to be “back then”.

The former Sharks coach said that for now, he intended to hang in there and wait for a top job in the league to eventually come up.