McKinnon to Sue NRL and McLean 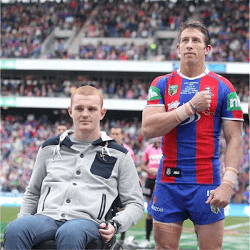 McKinnon To Sue NRL And McLean For Spinal Injury

Now McKinnon has decided to continue legal processes against the NRL and Jordan McLean. McLean is the Melbourne Storm forward who was part of the three-man tackle that changed McKinnon’s life forever.

McKinnon previously received the maximum compensation from the NRL of $500,000 as well as managing to raise $1.2 million to cover medical costs.

However after seeking further legal advice, McKinnon has decided to proceed with further action against both the NRL and McLean due to his rising healthcare costs.

His legal team has met with the NRL head Todd Greenberg but no official response has been given regarding the outcome of the meeting.

The NRL has in fact stated that no claim has been logged against them. At this stage it is unclear whether the legal case will continue on to court or if it will be settled outside of court.

In 2015 McKinnon conducted an interview for Nine Network and stated that at the time he had no idea how much his spinal injury was going to end up costing him.

The accident involved three players delivering a lifting tackle to McKinnon, resulting in him landing very awkwardly with the three players falling on top of him.

Matters were made worse when Melbourne Storm captain Cameron Smith was seen arguing with the ref when it was clear that McKinnon’s injury was horribly serious and he was being prepped to be carried off the field.

McKinnon’s decision to sue both the NRL and McLean has resulted in an online backlash from NRL fans that have been less than supportive.

NRL head Todd Greenberg has been quoted as saying that McKinnon needs to do what he needs to do.

They have offered the player employment for life but the extent of the employment or potential future compensation is currently just speculation by fans and pundits.