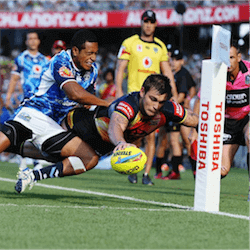 This popular format of the game has had a great reception since it was first implemented back in 2014. The initial even featured 4 pools of 4 teams that culminated in the final match. On that first occasion of 2014 the North Queensland Cowboys were able to cruise past the Brisbane Broncos in a 16 – 7 victory which saw the Cowboys lift the trophy.

The tournament has always been a favourite for punters due to its clear cut and concise knock out structure. No ifs, buts or maybes, when you’re out, you’re out. If you combine that kind of nail biting excitement with a player pool of over 280 players set to hit the field in over 30 fast paced, action packed games and you have a sports entertainment smash hit.

It also helps those of us that may have shorter attention spans with halves being a frugal 9 minutes a piece, which inspires some daring dashes to the try line.

For 2017’s NRL Auckland Nines tournament some heavy hitters have confirmed such as Jonathan Thurston, Shaun Johnson and Jarryd Hayne.

Considering the tournament’s relatively short running time of 2 days there is quite a lot for players to compete for. Besides the bragging rights of being able to lift the trophy there is over NZ $2.6 million dollars in prize money.

Punters won’t be disappointed either as betting action is set to intensify as the draws are revealed and final teams are announced. When one also considers the old school approach taken during the matches of having no video referee and only 5 officials on the field then it quickly becomes apparent how emotions on the day can skyrocket. On top of this, the NRL starts up quite soon afterwards so this is a real primer event and offers an early glimpse at player and team fitness and form.

Be sure to keep checking in with us as the event draws nearer for further info on this and many other fixtures.