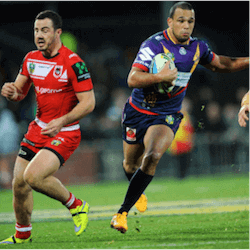 All 16 teams in Australia’s NRL 2017 play the last of their ladder matches to decide who goes through to the qualifying and elimination rounds this week. Thursday’s opening clash between North Queensland Cowboys and Brisbane Broncos was a must-win for the Cowboys, which they didn’t win.

The Broncos, favourites at $1.27, took a tenacious 20-10 victory at Townsville’s 1300 Smiles Stadium, so the Cowboys’ safety at seventh on the ladder now depends on how Manly-Warringah Sea Eagles and St George-Illawarra Dragons do in their up-coming matches.

Manly are eighth, tied on 30 points with the Cowboys, but behind on points difference, while Penrith Panthers are also on 30 and lying sixth. The Sea Eagles are at home to Penrith in their final match of the regular season on Saturday. If they win, they leapfrog both the Panthers and the Cowboys into sixth. Betting sites reckon Manly can do it: they’re ate $1.85, compared to Penrith at $2.10.

If the Panthers prevail, the Sea Eagles remain in eighth. To stay there, Manly then need a Sunday win by the Canterbury-Bankstown Bulldogs to stave off the challenge from the Dragons in ninth. With betting sites offering St George-Illawarra at $1.40 and the Bulldogs at $3.30, that seems unlikely. But if both the Sea Eagles and the Dragons win their Round 26 matches, it’s the Panthers and the Cowboys who miss the knockout stages.

Roosters Have a Shot at Home Advantage

The other five matches in Round 26 are unlikely to affect the ladder positions; they’re mostly mismatches between teams so far apart, not even an unbelievable upset makes a difference. On Sunday, Wests Tigers need a win against New Zealand Warriors to stay safe from the wooden spoon, although current wooden-spooners Newcastle Knights look unlikely to trouble fifth-placed Cronulla-Sutherland Sharks.

Likewise, Friday’s match between the fourth-placed Parramatta Eels and South Sydney is unlikely to go the Rabbitohs’ way, and ladder leaders Melbourne Storm are massively favoured to beat Canberra Raiders on Saturday.

Saturday’s match between Sydney Roosters and Gold Coast Titans will be worth a punt, though. It’ll make no difference to the Titans, at $9.50, but if the $1.10 Roosters get the win as expected, they go ahead of the Broncos into second on the ladder and a possible home semi-final, provided they make it through the intervening rounds.