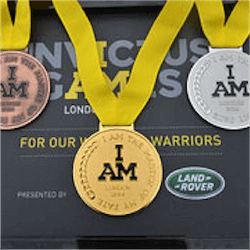 Australia has millions of avid online sports betting enthusiasts, but that isn’t the only reason we’re such a sports-obsessed nation. The courage, determination and unconquerable human spirit displayed by sportsmen and -women is built into the very fabric of our have-a-go national psyche.

It’s also an attitude built into the Invictus Games, the adaptive sports tournament inaugurated in 2014 for athletes who are also injured, disabled or ill members of the armed forces. Australia is one of 17 nations sending a team to the 2017 Invictus Games in Toronto this September, for a competition that celebrates the best in military camaraderie and the indomitable human will.

Australia has selected a team of 53 athletes to represent the country at Invictus Game 2017, and we will also host the 2018 games in Sydney. The squad, composed entirely of serving or former members of the armed forces, is currently hard at work in training for Toronto.

Athletes Demonstrating the Spirit of Invictus

The games are the brainchild of the UK’s Prince Harry, who will be in Sydney in June for the official launch of Invictus Games Sydney 2018. The prince got the idea from the USA’s Warrior Games. However, that contest is open only to American servicemen and -women, whereas Invictus invites participants from all the nations that have been modern allies of the UK in conflict.

So the Australian team and their Canadian hosts will be joined in September by teams from the UK, the USA, New Zealand, France, the Netherlands, Germany, Italy, Denmark, Estonia, Romania, Ukraine, Georgia, Iraq, Jordan and Afghanistan.

There is also a variety of sports on offer, adapted for athletes with disabilities. Australia’s Stewart Sherman, Sean Lawler, Jamie Tanner and Dan Jeffrey, for example, will be tackling all comers in wheelchair tennis. Not only is competing for their country a huge honour, Jeffrey told reporters, but he also feels that Invictus training has been an important part of his mental and physical rehabilitation after his injury.

Canadians Lutz Stelzner and Mark Cunningham are living embodiments of the Invictus spirit too. Stelzner is blind, while Cunningham is partially deaf – but that doesn’t stop them being a dynamite tandem cycling team. Cunningham does the steering, while Stelzner provides a welcome extra pair of feet on the pedals.