What You Need To Know About The Summer X Games 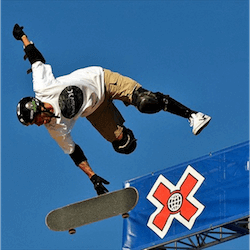 In Australia, sports enthusiasts will follow and bet on a wide range of sports in every shape and form. From golf to darts, surfing to hockey, cricket to squash and just about everything in between. It is no wonder then that extreme sports have garnered much attention, becoming one of the fastest growing betting markets in the country. When it comes to extreme sports, the Summer X Games is the main event of year. This annual sporting event is hosted by ESPN and showcases over 200 of the best extreme sports athletes from around the world.

The Summer X Games was first held in Rhode Island over two decades ago and has gone on to become the biggest extreme sports showcase event on the planet. The X Games attracts the biggest names in the sports industry and often features outrageous new tricks such as Tony Hawk’s revolutionary 900 in the skateboarding event. While the competition may be the highlight of the event, the X Games also features a much-publicised music concert on each day as well as an environmental awareness campaign.

This year, the 2017 Summer X Games will be held in Minneapolis Minnesota. Kicking off on the 13th of July, the event will run to the 16th and showcase 200 extreme athletes from around the world. In each event, athletes compete for the bronze, silver or gold medal. For local punters, betting on the X games can be extremely rewarding, if you know which event to bet on. In the Summer X Games, each sporting event will include multiple disciplines.

In the BMX event, punters can be on Big Air, Dirt, Doubles, Park, Vert, Street or Best trick. In the skateboarding event, bets can be placed on Big Air, Doubles, Park, Street or Vert. Finally, in the Moto X event, punters can be on the Best Trick, Best Whip, Freestyle, Flat-Track Racing, QuaterPipe High Air or the Step Up event.