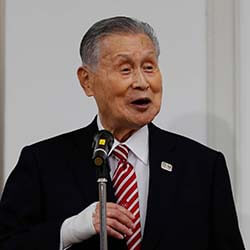 The head of the Tokyo 2020 Olympic Games organising committee has resigned amid a storm of controversy. Yoshiro Mori resigned on Friday after a public apology, explaining that his inappropriate and sexist remarks against women have caused immense chaos in international sports circles.

The former Japanese Prime Minister during his apology told a meeting of the Tokyo 2020 executive board how he desired to express his “deepest” apologies and regret to the members of the council as well as to the entire international Olympic community. He added that the most important thing was for the Olympic Games to proceed in July, and that if he was going to be regarded an obstacle then that was something that had to be avoided at all cost.

A Fuji news broadcaster had in the meantime revealed that the Japanese government had sought to prevent the installation of Saburo Kawabuchi, 84-year-old “mayor” of the Olympic village, as successor to the departing Mori. The broadcaster quoted an official in the service of the Japanese government to have said that officials really wanted a woman to be named replacement to Mori. The source said the controversy surrounding the former PM had done serious damage to Tokyo’s reputation of Olympic Games host city.

According to local media, Seiko Hashimoto, the female Minister in charge of Women’s Empowerment, and Minister of State for Gender Equality, is currently being considered a possible candidate. The Olympic organising committee will soon set up a panel to select a successor, chief executive Toshiro Muto has told reporters.