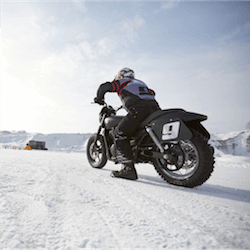 The X Games, Summer or Winter, are just over 20 years old, and as with any new sport, various disciplines will come and go, depending on their popularity among both athletes and spectators. The Games organisers welcome innovation from equipment manufacturers, so the Snow Hill Climb could well turn into a regular medalled event at the Winter X Games.

This year’s event will be run entirely on modified HD Sportsters, even though their liquid-cooled Street range might be a more obvious fit for the conditions. The modifications have created quite an impressive-looking bike, with a wider, lighter, longer, dirtbike-style frame, and an extended back swing arm to help with traction and prevent flipping.

The most impressive modifications have been saved for the engine, however, which now delivers almost twice the horsepower of the original. The Snow Hill Climb may not be the most popular Winter X Games right out the gate, but it’s certainly going to be one of the loudest.

Harley-Davidson has also created innovative rear tyres for the snow, with riders getting a choice of paddles, bolts or studs to provide traction as they make a mass dash up the SuperPipe course.

The rest of the events at the Winter X Games will be more familiar to sports betting fans: skiing and snowboarding predominate, with each divided into men’s and women’s Big Air, Slopestyle and SuperPipe categories. Snowboarding also features Snowboard X for both sexes and Bobsled Freestyle. There are also a number of Snowmobile and Real Video events.

Canadian snowboarder Mark McMorris should be getting a lot of attention from the fans. He’s back to compete in the Big Air and Slopestyle snowboarding, despite almost dying in a horrific accident less than a year ago. McMorris caught an edge on a takeoff doing a jump last March, and careered off course into a tree, leaving him with a collapsed lung, a fractured pelvis, left arm and ribs, a ruptured spleen and a broken jaw.

The severity of his injuries initially made his survival touch-and-go, but the 24-year-old athlete is a never-say-die fighter. He now appears completely recovered in time for the 2018 Winter X Games.