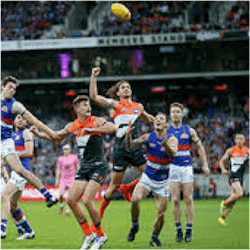 After 14 matches in the 2017 AFL Premiership season, the Top 8 teams on the ladder are separated by a spread of two wins. There is also just two wins’ difference between current No. 8, St Kilda, and the six teams below them, meaning 14th-placed Fremantle are four wins behind ladder leaders GWS Giants.

However, with Essendon, Gold Coast, Hawthorn and Fremantle all sitting on 24 points, compared to the Giants’ 42, their chances of qualifying for the quarter-finals in the eight matches remaining in the home and away rounds are increasingly slim.

One team in with a better shot are the reigning premiers, Western Bulldogs. The Footscray scrappers have won only seven of their first 14 games. As a result, they are wallowing in 10th place, and they need a win on Friday against Adelaide at the Oval to stay in contention.

That won’t be easy, as the Crows are currently second behind the Giants. They are the favourites to win at home, with odds around $1.30, while the Dogs are closer to $3.75. However, since it’s make-or-break time, they might deliver a profitable upset. You can bet on this game and on many others online at Crownbet.

The Giants are overwhelming favourites to beat Hawthorn in Saturday’s first match in Tasmania, but the Collingwood v Essendon clash at the MCG is another key game. Essendon can’t afford a loss, if they are to hang onto a small hope of making the final eight, but the two sides may be too closely matched for punters to call.

The Swans play the Suns in Saturday’s next important match, and at around $1.10 to $6.40, Sydney should have the edge over the Gold Coast side. They also need a win, if they are to rise from ninth on the ladder into a QF berth.

After Geelong meet Brisbane Lions at the Gabba, in a match that everyone apart from the most fervent Lions fan expects the Cats to win, the fourth key match of the weekend will be St Kilda v Richmond at Etihad Stadium. The Saints are lying eighth and the Tigers fourth, so whoever wins, they ought to shake up the ladder.

On Sunday, the AFL action winds up with North Melbourne v Fremantle, Carlton v Melbourne, and East Coast Eagles at home to Port Adelaide in Perth.