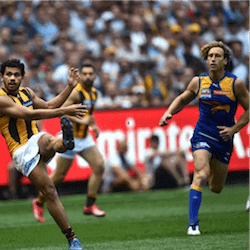 Aussie Rules Football supporters the world over are eagerly awaiting the first round of the AFL 2017 Toyota Premiership from March 23 to 26, and the 26 rounds to follow before September’s Grand Final. The 2016 tournament ended in thrilling style, with the Western Bulldogs finally breaking a 62-year dry spell to win the Grand Final against the Sydney Swans 89-67.

The Dogs will go into the AFL 2017 Toyota Premiership with considerably more support than they enjoyed at the start of last year’s season, and currently they are being offered at $5.50 for a tournament win. That makes them second favourites this year to the Western Sydney Giants at $4.50, a team brimming with some of the finest young talents in the game.

The Carlton Blues and Richmond Tigers will play the opening game of the 2017 Premiership at the MCG on March 23, with all 18 teams scheduled to play over the course of the weekend. Byes will only start in Round 11, so punters will have plenty of time to see how the ladder is shaping up before they commit to their Grand Final bets.

Before the AFL 2017 Toyota Premiership kicks off, however, betting enthusiasts have seven weeks of pre-season action to keep them busy. February 03 sees the start of the 2017 NAB AFL Women’s Competition, with another round every weekend thereafter until the March 25 Grand Final.

The Bulldogs are entering a women’s side in the tournament for the first time. They will start their season with four consecutive home games at Victoria University Whitten Oval, providing plenty of pre-season betting options.

The JLT Community Series is the official men’s footie pre-season tournament, due to begin on Thursday, February 16. Betting fans won’t want to miss their first chance to check out the Bulldogs’ 2017 form, when they meet the Melbourne Demons at Whitten Oval on February 18. The Adelaide Crows / Geelong Cats match at Adelaide’s Richmond Oval on March 05 is also going to be a tightly contested pre-season match that will offer rewarding bets.