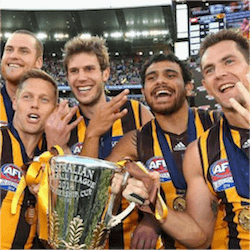 Western Bulldogs fans can’t wait for the AFL 2017 Toyota Premiership to start. Or perhaps they can: they waited 52 years, from 1954 to 2016, for their team to win another championship, so waiting may be what they do best. All snickering aside, though, the Melbourne side that beat the Sydney Swans by an emphatic 22 points in last year’s thrilling final is no joke.

The bookies also think the Footscray scrappers have the talent and guts to go all the way two years in a row. The Dogs are currently second favourites in the AFL 2017 Toyota Premiership betting, at $5.50.

The favourites at the moment are the Western Sydney Giants, at $4.50. Pundits agree that the Giants are fielding one of the strongest young sides in the 2017 tournament, so they may have the edge over the Dogs, not to mention all the other teams.

Round One Kicks Off on March 23

The weekend of Thursday, March 23 to Sunday, March 26, will see first-round games for all 18 teams in the Premiership, kicking off 24 rounds of footie before the Grand Final in September. Apart from the Dogs and the Giants, punters might also wants to consider bets on the Sydney Swans, Adelaide Crows, Geelong Cats and West Coast Eagles. According to current betting odds, they’re the four teams with the best chance of making the Top 6 alongside the favourites.

The opening match of the AFL 2017 Toyota Premiership will be a Melbourne derby at the MCG. The Carlton Blues face off against the Richmond Tigers, in a tussle that should see supporter rivalries grow as heated as those on the turf. The two sides are quite evenly matched, having finished last year’s premiership 14th and 13th on the AFL ladder, respectively.

However, the Dark Blues are on their way back from a 14-year drop in the rankings, while the Tigers’ slip to 13th last year was a disastrous slide after finishing in the Top 8 for the previous three years running. So Carlton could be the side to back for this one.