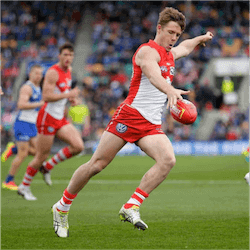 There are a couple of amendments to the Laws/Interpretations of Aussie Rules football that the AFL has introduced for the AFL 2017 Toyota Premiership. To get players and umpires used to them, they are being trialled through the JLT Community Series in the pre-season warm-up to the Premiership kick-off on March 23.

The changes relate to four offences: high tackles, infringing on the protected area, contesting designated rucks and deliberate rushed behinds. Whether these changes become permanent depends on their success in this tournament, but will also require strong support from the clubs.

The Giants justified their place at the top of current AFL 2017 Toyota Premiership betting in the first round of the JLT Community Series on Saturday. The Greater Western Sydney side thumped Perth’s West Coast Eagles 70-37: a 33-point margin.

The inaugural season of the AFL Women’s Competition is also giving punters more thrills, and stadiums bigger gates, than they bargained for. After Round 3, it looks like the Adelaide Crows and Brisbane Lions women’s sides are on track for the semis and the March 25 Grand Final.

Both the Crows and the Lions are undefeated so far. The Crows have beaten the Giants, the Bulldogs and Carlton in the first three rounds, while the Lions have emerged victorious over Melbourne, Fremantle and Collingwood.

Collingwood, on three losses, is languishing at the bottom of the table with the Giants and Fremantle, with two losses and a draw apiece. With two wins and a loss each, Carlton and Melbourne both have a shot at the semis, but the Bulldogs on one win and two losses could still be a threat in the remaining four rounds.