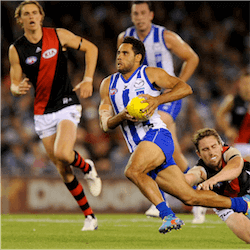 The equation is simple: if Western Bulldogs beat Hawthorn in the final round of the AFL home and away season at Etihad Stadium on Friday night, the Dogs slip ahead of Essendon into eighth on the ladder. If Essendon, West Coast or St Kilda win their games on Sunday, however, they’ll also crack 48 points, bumping the Bulldogs from the knockout rounds on points percentages.

It’s a long shot, but long shots are what made the Footscray scrappers the 2016 champions in the first place. When they ended a 52-year drought to take the Premiership last year, they started the knockout rounds seventh on the ladder. Their subsequent four unlikely wins, including a triumphant Grand Final against the Swans, was a record first for an AFL team finishing that far down on the points table.

The Bulldogs are $1.75 favourites against the Hawks at $2.10 on Friday. If they win, their weekend of stress has only just begun: the Dogs will be glued to Sunday’s action along with every footy punter in Australia, but with a lot more at stake.

Essendon are at $1.10 to beat Fremantle, at $6.00, at Etihad, although Dogs fans will be encouraged by the Dockers’ 116-79 win over the Bombers at the Domain Stadium in Round 7. But the Melbourne side is back on form, winning five of the nine games they’ve played since the end of the bye rounds, including a 90-57 thumping of Gold Coast in Round 22, compared to Fremantle’s two wins and 155-51 slaughter against Richmond last week.

The Saints, at $2.80, could struggle to beat Richmond, at $1.40, on Sunday, and West Coast has a mountain to climb against ladder leaders Adelaide; the Eagles are at $2.30, and the Crows at $1.60. But Essendon could definitely upset the Bulldogs’ applecart.

Saturday Could Reshuffle Top of Ladder

Melbourne, at $1.60, need to beat $2.35 Collingwood on Saturday to stay safe in the Top 8, while the $2.45 North Melbourne vs $1.55 Brisbane Lions match will decide the wooden spoon. Sydney Swans are overwhelming favourites to beat Carlton, as are Port Adelaide against Gold Coast.

The Geelong Cats vs GWS Giants match should be Saturday’s highlight. With the Giants second on the ladder, two points behind Adelaide, and the Cats two points behind the Giants, and the two sides separated by less than 10 cents in the odds, a win could mean a crucial home semi-final.