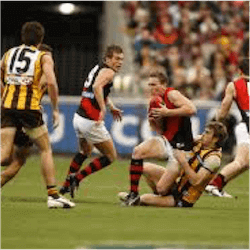 Western Bulldogs blew their last slim hope of making the Top 8 to defend their 2016 AFL crown last week, while both Essendon and West Coast Eagles won convincing victories to slip ahead of Melbourne on points percentage and thwart the Demons’ bid to make the knockout rounds too.

The Eagles won a Hail Mary into the finals by beating ladder leaders Adelaide on Sunday. But the Crows still top the ladder, as well as the betting to win the tournament outright, at around $2.00. Adelaide’s next step is their Qualifying Final against GWS Giants at the Adelaide Oval next Thursday night.

The Giants finished fourth on the ladder, after a final-round loss to Geelong Cats on Saturday. GWS are third-favourites, at around $4.50, in the outright futures. However, the Crows are odds-on at less than $0.50 to win next Thursday’s match, with the Giants at $1.75.

For the second Qualifying Final at the MCG next Friday, the Cats play Richmond Tigers. The two sides lie fourth and fifth in the outright futures betting odds, with Geelong at around $5.00 and Richmond at around $6.00. For their Qualifying Final clash, the Tigers are at $1.10, with the Cats narrow favourites at $0.75.

Bunfight Ahead in Elimination Finals

The AFL Elimination Finals next Saturday feature the teams that finished fifth, sixth, seventh and eighth on the ladder: Port Adelaide, Sydney, Essendon and West Coast. The Swans are still $4.00 second-favourites to win the 2017 AFL outright, and they’re at $2.20 to win their Elimination Final at the SCG against the Dons, who are at $3.70.

Port Adelaide are considered better bets than the Eagles to make the Semis, as well as in outright futures, with the Dockers at $16.00 and West Coast at $40.00. For their Elimination Final next Saturday, punters can back Port Adelaide at $0.50, or the Eagles at $1.75.