Did your AFL Grand Final Bets work out as you expected? 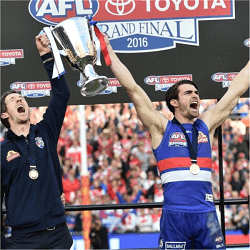 Did Your AFL Grand Final Bets Work Out As Expected?

The 2016 AFL Grand Final took place on the 1st of October 2016, and it really was the stuff of fairy tales. The underdog Western Bulldogs beat the Sydney Swans, who were the favourite for AFL Grand Final bets, in a nail-biting contest.

For offline and online sports betting enthusiasts, the game got off to an exciting start and the action didn’t stop. The Bulldogs grabbed ascendency over the goliath Swans team, with a 2.6 to 1.2 third quarter. They started the final term with an 8-point lead, but struggled to put Sydney away here. Anything was possible, and at this point all AFL Grand Final bets were on!

While the Swans were the online sports betting favourites to win, with 13 of their 22 players having contested the AFL Grand Final flag previously and with 8 of them actually having helped to win the title before, support on the ground seemed much stronger for the Bulldogs.

None of their 22 had ever played in a Grand Final before, but the support at the Grand Parade on the 30th of September had a sea of Western red, white and blue colours and far less red and white Swans colours. Bulldogs coach Luke Beveridge was taken aback by the groundswell of support, and also said before the match that the issue of winning and ending the AFL’s longest-running premiership drought was definitely on the mind of the team, but that nobody was really discussing it.

These nerves were another reason why AFL Grand Final bets were focused on a Sydney Swans victory at online sports betting facilities. The team might easily have choked under pressure, but they rode the momentum of the past 3 weeks and were able to raise the cup for the first time since Charlie Sutton’s crew won in 1954.

This win makes the Bulldogs the only team to ever have won from the 7th position on the AFL ladder, and their 13.11 (89) to 10.7 (67) was more than enough to put grins on the faces of those that backed them in AFL Grand Final bets. With odds favouring Sydney at online sports betting sites, those who bet on the Doggies are now celebrating huge windfalls.

The replacing in the Swan line-up of Aliir Aliir and Harrison Marsh with Callum Mills and Jarrad McVeigh was debated until the last moment, and believed by many to be the biggest gamble of John Longmire’s coaching career.

Following the game Longmire conceded that his side wasn’t at its usual standard, and those who placed AFL Grand Final bets before this exchange might find themselves agreeing. If this was the case for you, it’s very understandable. Use the insights you gained for your 2017 AFL Grand Final bets for another shot at winning big, or, if you’re looking for more immediate results, place a wager on the upcoming Caulfield Cup that takes place on October the 15th.