AFL Grand Final Betting Tips you have to consider 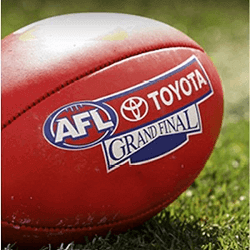 The game that will determine this year’s Australian Football League Premiership Champions is upon us once again! The AFL Grand Final always takes place on the last Saturday in September or the first one in October, and 2016’s event is set to kick off at 2:30 AEST on the 1st of October.

The game has become very important in Australian culture, and several events and traditions are associated with it. It is always played at the Melbourne Cricket Ground and draws a crowd of thousands, with many more watching from home.

AFL Grand Final betting has long been as much of a national pastime as simply watching the games, and with the abundance of online sports betting sites available, there are now far more markets to wager on. It’s always a good idea when online sports betting to do as much research as possible, and this is just as true in AFL Grand Final betting as it is with any other sport.

The same rules apply and the same issues should be considered, namely the past performance of the teams, the weather conditions of the day, ladder standings and the stats on the team’s performance over the preceding season. So what’s different in AFL Grand Final betting, in comparison to other Australian Rules Football betting?

The main difference can probably best be described as contrasting intensity levels. The Grand Final is pitting the best of the best against each other, so it’s often more difficult to pick a clear winner. Great performance in the Preliminary finals should also be taken with a pinch of salt, since the pressure in the Grand Finals is much more intense and has caused many teams to choke in the past.

That’s why it’s a good idea to look closely at online sports betting site’s line bets and their margins, and consider putting your money on here, rather than on a straight-out win. The teams going against each other this year are the Sydney Swans and the Western Bulldogs, having defeated the Geelong Cats and the GWS Giants in their respective Preliminary Final matches.

In terms of specific things to watch for and consider with this year’s AFL Grand Final betting, Ben McGlynn’s determination could make him a huge asset for the Sydney Swans. Having missed Grand Final opportunities in the past due to being injured, traded and dropped, however, McGlynn has admitted he is nervous and it seems his performance could go either way.

The Swans have been plagued by injuries recently, and the line-up remains to be seen. Key players such as co-captain Jarrad McVeigh might have to be benched, which could affect team performance and should be considered when online sports betting. However, Sydney is still the favourite to win the flag this year. Many punters, especially if this is their first foray into AFL Grand Final betting, have chosen to back this side and industry specialists seem to think that the Swans will triumph. The underdog Western team is riskier, though betting on them could ultimately be more rewarding.