AFL Players to Be Tested Before Season Relaunches 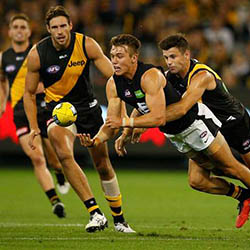 Australian Football League players must face novel coronavirus COVID-19 testing before they commence training ahead of the relaunch of their season. The AFL has mandated that each listed player and member of staff needs to be tested by Friday before the clubs potentially start up full-contact practice with complete squads in the week of the 18th of May.

The obligatory tests need to be completed as part of the AFL’s Return-to-Play project which is still in the last stages of finalisation.

In a note sent to all Clubs last Tuesday detailing the COVID-19 testing requirements, the AFL also let it be known that Football departments will need to reduce their spending by 40%. This is part of the extreme cost-cutting measures being introduced to ensure the competition survives. Staff numbers are to be capped at 24 and must include a doctor, someone to manage player development, and a psychologist.

AFL General Counsel Andrew Dillon called for a prudent approach to expenditure to be taken. It must be recognised that a considerable amount of industry revenue has already been lost and that the material risk to the sport’s financial position in this season and those to come is dire.

As part of the stringent Return-to-Play rules, players have been forbidden from featuring in the second-tier competitions they are affiliated with. But the association may permit those who have not been chosen for regular games to take part in matches against other clubs in controlled environments.