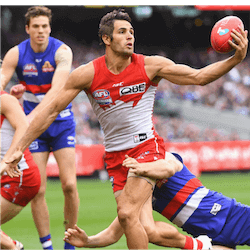 2017 AFL Premiership Upsets in First Round

Australian football fans hoping that the 2017 AFL pre-season, which ended on 12 March, would provide a clear front-runner for the AFL Premiership were disappointed. Each of the 18 teams in the Premiership played three stand-alone matches, but none came through the JLT Community Series undefeated.

However, 11 teams did win two out of three: namely, Sydney, Collingwood, Greater Western Sydney, Melbourne, Gold Coast, Richmond, North Melbourne, St Kilda, West Coast, Fremantle and Adelaide. All would have left their fans with high expectations for last week’s first round of the AFL Premiership.

However, Richmond, Melbourne, West Coast and Adelaide were the only teams to fulfil that promise. With 2016 Grand Finalists Sydney losing to Port Adelaide, the Saints losing to the Demons for the first time since 2006, Brisbane Lions beating Gold Coast, Essendon beating Hawthorn and Adelaide thumping GWS 147-91, five of the nine matches played yielded results contrary to the bookies’ expectations.

Betting Fans Have Plenty of Options

The Melbourne Demons and Adelaide Crows now have many supporters excited; if they can continue the form they showed in their opening matches, they could well stand a chance of moving out of the lower tiers, and perhaps even challenging for the Grand Final.

Most tipsters still see reigning champs the Western Bulldogs as the major favourites in the 2017 AFL Premiership, however. Despite losing to both the Demons and the Lions in the JLT Community Series, they managed a win against Gold Coast, followed by another victory against Collingwood in the first round of the premiership.

Despite the loss to Adelaide, GWS is also a side full of talent and experience, so punters won’t want to ignore them in the rounds to come. However, the premiership is still effectively wide open.

West Coast beat North Melbourne in Round 1, and another victory against the Saints in Round 2 could set them up well. The Swans will need a strong comeback against the Bulldogs in their replay of the 2016 Grand Final this Friday, but they are always capable of surprising, so online betting fans will be watching the second round with interest.