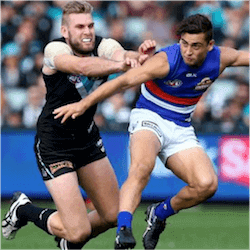 Thursday, 23 March is a day Australian footie fans will be awaiting eagerly. That’s the day the 2017 AFL Toyota Premiership starts, with a match between Carlton and Richmond at the MCG kicking off a feast of footie action, live and on TV.

The day also marks the start of 27 weeks of Aussie Rules excellence for sports betting enthusiasts around the world, before the Premiership Grand Final on Saturday, 30 September. That game is also set for Melbourne’s iconic stadium.

Punters are already enjoying the footie online, with the Pre-Season in full swing. The JLT Community Series is giving everyone a good idea of the teams to watch in the Premiership.

The inaugural AFL Women’s Competition is proving that women’s footie can indeed attract interest, both at stadiums and on television, while it adds a new option in the online sports betting market too. Both competitions will reach their peak over the next three weeks.

We’re two weeks into the JLT Community Series, with two weeks to go, and the smart money is on three teams to end up top of the table: Melbourne, Gold Coast and North Melbourne. All three have played two and won two.

However, Greater Western Sydney, Collingwood, St Kilda and Richmond have yet to play their second matches of the JLT, and all four won their first games. So this weekend’s fixtures, against Sydney, Fremantle, Carlton and Port Adelaide respectively, will be crucial.

Defending Premiership champs the Western Bulldogs are 0 in 1 after losing to Melbourne two weeks ago. So they also need to beat the Brisbane Lions in their second fixture on Thursday night, if they are to stay competitive in the JLT.

The AFL Women’s Competition continues to enjoy great support, and it looks like the Adelaide Crows and the Brisbane Lions are unstoppably on course for the top of the table. Both have four wins in four games, with three left to play before the Grand Final on Saturday, 25 March.

None of the other AFL Women’s teams have maintained an undefeated record. This Friday, however, the Lions and Crows meet at Adelaide’s Norwood Oval. So unless they draw, one will lose their unbeaten status, while the other emerges as the clear favourite for the AFL Women’s Grand Final.